The annual Kirstenbosch Summer Sunset Concert season will be kicking off in late November. As usual, the magnificent gardens provide the backdrop for these open-air concerts – the perfect place to spend a lazy Sunday afternoon.

To usher in the new year, Kirstenbosch will be hosting a New Year’s Eve party on 31 December from 8.30pm. The opening act is the talented Grassy Spark whose music fuses ska with rock, funk, reggae and Latin. Cape Town’s own Jeremy Loops will then take to the stage to entertain the crowd with his version of modern folk music.

It is a picnic-style concert, so bring a blanket and picnic basket.

Tickets cost R330 and are available from Webtickets. 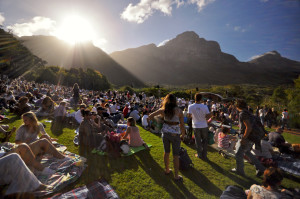 -up is amazing with Freshlyground kicking off the season on 22 November, the Parlotones being the first show for 2016 on 3 January and Beatenberg getting on the stage on 27 March 2016.

As always, the tickets for all the concerts are available online at Webtickets and at the gate on the day, depending on availability. Physical tickets will be on sale from the Tuesday before the concert at the Kirstenbosch Box Office. Come rain or shine, the concerts will go ahead.